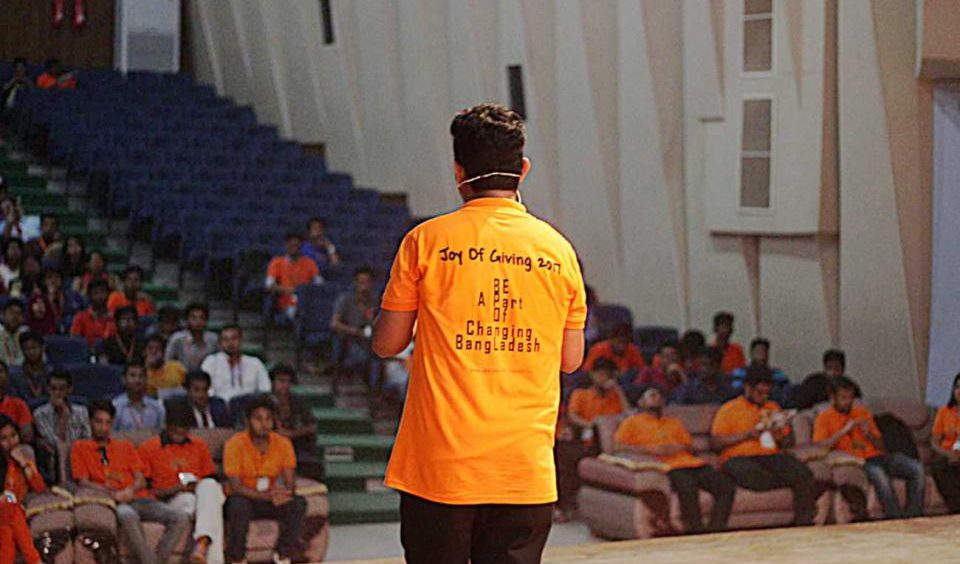 If you were travelling anywhere around Dhaka on May 21, you are likely to have noticed young orange-clad volunteers collecting and raising donations from pedestrians in the scorching heat.  About one thousand volunteers from OBHIZATRIK Foundation worked across 20 points in Dhaka city, aiming to raise funds in order to feed 2,000 underprivileged families iftaar for 20 days. The initiative was called “Joy of Giving.” No matter how small the contributions were, the volunteers received them with a smile; and thus, the target was achieved as planned.

This, in essence, is what OBHIZATRIK Foundation is all about. “We always try our best to help the ones in need,” says Ahmed Imtiaz Jami, the founder and President of OBHIZATRIK Foundation. “It was in 2010 when I started the foundation. When I met a small child selling newspapers on a bus, something hit me within and it got me thinking about the child labour stories that I would read on the newspapers and how it is fast increasing in Bangladesh. You see, children belong in schools and not in harsh working conditions such as this.”

Jami further elaborated, “I discussed this with a few friends of mine, and went to visit the home of the particular child who was selling newspapers on the bus. We arranged some money for his father, which was enough capital for him to start a small grocery shop. I felt really happy to be able to help a family in need and since then, I never looked back.”

From humble beginnings, with the initiative of just one young man, OBHIZATRIK Foundation now has over 3,500 volunteers in 32 districts working for the betterment of the underprivileged. OBHIZATRIK extends its hands not only to the underprivileged in Bangladesh, but also to the victims of natural disasters in neighbouring countries. “I remember working all night making relief packages for the victims of the horrific earthquake in Nepal,” says Ariza Ahmed, former acting head of sponsorship for OBHIZATRIK. “We sent two truck loads of relief to Nepal, and were incredibly happy to help in whatever way we could. When we began OBHIZATRIK, we had to spend money from our own pockets. I am elated to see how far the organisation has come now,” she adds.

OBHIZATRIK Foundation currently has two schools, one in Mirpur and another in Patuakhali. Over 250 kids are getting free education along with modern facilities. OBHIZATRIK Health Care, a sister concern of the foundation, provides free healthcare and medicine every Friday to the ones in need. ‘Shokkhom’, a ‘livelihood’ project by OBHIZATRIK, collects zakat funds for the poor and thus endeavours to give a decent means of livelihood to individuals in need via their funding and arrangement of capital. “We want to start an environmental awareness project called ‘Green Peace’, where we plan to plant more than 6,400 trees in 64 districts of Bangladesh,” says Jami. “Moreover, we want to establish OBHIZATRIK schools in all the districts of Bangladesh. This might sound ambitious but we will definitely make it happen!” he adds.

Having started pre-schooling with only 20 children, OBHIZATRIK Foundation has come a long way in helping some of the most neglected people in society. After making notable strides in philanthropic activities, it is now recognised as one of the most earnest and hard-working organisations in the country. All of the founders, volunteers and affiliated people will testify to one thing: OBHIZATRIK Foundation is a family; the family with empathy and willingness to help the ones in need, a family that really takes pride in the joy of giving.